Since time immemorial, man has looked up to the sky. When the daily hustle and bustle slowly comes to rest at dusk and the sun disappears on the horizon, the eternal order of the stars appears in the firmament. While everyday life is full of impasses, surprises, dangers and unknowns, the night sky offers stability and orientation. Seemingly unchanging, the stars form an eternal cosmic order in the nocturnal heavens. They offer man reliable anchor points in the waves of space and time.
The first lunar calendars of the hunter-gatherers, the first solar calendars of the Neolithic farmers, the monumental calendar buildings of the early civilizations, they are all based on astronomical patterns. They give people orientation in the course of time: When is the right moment for sowing and for harvesting? When will the days get longer again? When does the tide go out, when does the tide come in? Existential questions like these can be answered with calendars. And if already the course of sun and moon can give such precious information, why not also the course of the other wandering stars, the planets in the welkin? Thus, in the course of the 3rd millennium BC astrology arose in Mesopotamia.

The origins in Mesopotamia

Like the archaic calendars, astrology developed out of the interpretation of signs. For on the one hand the orbits of the planets are signatures in the sky. On the other hand they follow fixed temporal periodicities. Sun and moon not only form the basis of most calendar systems in the world. They are also among the main factors in astrology. Also Venus, the third brightest celestial body after the sun and the moon, had high influence in celestial interpretations. The Maya aligned her to the feathered serpent Kukulcan, one of their highest deities. They devoted extensive observations and their most exact calculations to Venus. Also in Mesopotamia Venus had been of high importance to forecast events. In early days it was interpreted as a celestial sign:

“If Venus is in a disk at the rising: The king will call his subjects to account in a battle. If Venus stands next to the sun’s disk as it rises: the land will revolt. Famine will be severe. The king’s people will kill him in a battle. If the solar disk is next to the moon as it rises, and Venus is visible before them: a well-known, important person will rebel against the Lord.”

Such celestial omina are found in Mesopotamia from about the middle of the 3rd millennium BC. By 2000 BC, numerous stone towers dominated the cityscapes in the Tigris-Euphrates region, up to a hundred meters high already. These towers were mainly used for observing the sky. They began to record the orbit of Venus, its declination values, its disappearance and its reappearance before and after solar conjunctions. Also the fixed star positions were noted. As the centuries passed, the other planets were added. But for a long time, divination from the stars was more interpretation of celestial signs than astrology in the modern sense.

It was not until the 8th century BC that sky observation slowly became astronomy. Calculation tables for the future positions of the sun and moon developed from the centuries of observation data. With the help of the Saros periods the Barû already were able to predict solar eclipses. Later also the orbits of the five planets were included in the calculations. For this purpose the Babylonians invented the zodiac with its 360 degrees as a coordinate system. Around 600 BC, they divided it into twelve equal sections, the twelve signs of the zodiac. This laid the most important foundations of astrology.

Beginning of natal Horoscopes in Greece

Until that time, the vision of the heavens was exclusively royal and mundane divination. From the signs of the sky the destinies of countries and their rulers were read. Individuals were not taken into account. It was not until the end of the 5th century BC that horoscopes began to be calculated for the time of birth of individuals. The oldest known birth chart was drawn for the 29th of April 410 BC. It contains the zodiac positions of the Sun, Moon and the five planets. The ascendant, today one of the central elements of a horoscope, was still unknown to the Babylonians. It was introduced into astrology by the Greeks only in the course of the fourth century BC. The Greeks adopted astrology from the Babylonians, especially during the Persian campaign of Alexander the Great (356 – 323 BC). After Chaldean astrologers predicted Alexander would die there if he entered Babylon, and this prophecy came true, astrology rapidly spread in the ancient world. Chaldean astrologers such as the Baal priest Berossos founded schools of astrology throughout Greece.

The Greeks gave astrology its present form. For the first time they put great emphasis on the rising point of the zodiac in the east, the ascendant. Also the individual horoscope experienced its first bloom. This is certainly connected with the high value of the individual in the Hellenistic democracy. Contrary to obscure theories that astrology was already more than 10,000 years old, it only exists a little more than 2,000 years.

From Greece astrology came to Rome. Cicero (106 – 43 B.C.) dedicated a couple of side blows to it in his book “Of Divination”. Even then, in the last century before Christ, he considered astrology to be humbug. In the fictional dialogue with his brother Quintus, a large part of our modern arguments for and against astrology is already exchanged. He argues against astrology that twins do not have the same destiny, although they are born at the same time. Or he criticizes that the planets were much too far away from the earth to have any effect on people.

“For who does not see that children imitate the form and manners, and most also the postures and movements, of their parents? This would not come to pass if it were not the power and nature of the procreators, but the temperature of the moon and the nature of the sky that produced it. How? Do not people born at one and the same moment have different natures, ways of life and destinies? Does not this sufficiently prove that the time of birth has absolutely no influence on the destiny of life?” (Cicero 44 B.C. “Of Divination”)

Astrology, like other types of divination, was already controversial at that time. Ancient people have not been less critical to such magic teachings than today. Rather, astrology was repeatedly forbidden by law in the Roman Empire, for example in 139 BC with the banishment of all Greek astrologers from Italy, or under Diocletian in 294 AD and Velentinian in 370 AD. In the latter two edicts, astrology was even described as “damnable” and anyone caught practising “this forbidden error” was threatened with the death penalty, both the astrologer and his clients.
In other periods, however, Roman emperors used astrology as exclusive ruling knowledge, for example under Augustus (63 BC – 14 AD) or Hadrian (76 – 138 AD), the latter even being an astrologer himself. During these periods, it was hoped that the prohibition of astrology would give emperors an exclusive advantage. And it was therefore made a punishable offense for private individuals to practice it, especially if they dared to make predictions about the fate of the emperor or the state. In the inner circle of leaders, however, astrology was used intensively and all important decisions were made according to the stars. The public reputation of astrology was therefore already subject to great changes in the Roman Empire and oscillated between a respected science of the future and frowned upon superstition.

The first textbook on astrology did not exist until the turn of the century. The “Astronomica” by the Roman author Marcus Manilius presents the basics of astrology in five books. The work, written in verse, presents not only the signs of the zodiac, planets and ascendant, but also the houses, as well as the main aspects, the significant angular relationships between the planets, the Trine (120°), the Square (90°), the Sextile (60°) and the Opposition (180°). Another influential work was written in the second half of the first century AD by Dorotheus of Sidon. However, his “Pentateuch” has survived only in fragments, partly in Arabic translations from the 8th century.

The most important astrology book of the antiquity appeared in the middle of the 2nd century A.D. The Tetrabiblos of Claudius Ptolemy (about 100 – 178 A.D.) is considered as the standard work of astrology until today. It is a systematical text in four books and contains everything that constituted the stargazing of his time. Besides a detailed presentation of the mathematical and astronomical basics, it offers comprehensive astrological rules of interpretation for planets, signs, houses and fixed stars. The merit of Ptolemy does not lie in the creation of an independent system of interpretation, but above all in the systematic summary of the astrological knowledge of his time. His geocentric view of the world and his epicyclic theory shaped the astronomy of the Middle Ages until the Copernican Revolution.

The original version of this article including all sources can be found in the following book (German language only):
Niederwieser, Christof (2020) PROGNOSTIK 03: Trends & Zyklen der Zeit, Rottweil: Zukunftsverlag, S. 110ff 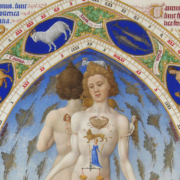 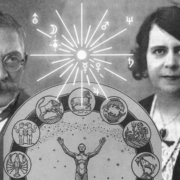 The Rediscovery of Astrology in Modern Times

The History of Astrology in India, Arabia and China
Scroll to top WordPress Cookie Plugin by Real Cookie Banner